SnakeByte was a hacker. That wasn't his day job obviously. You couldn't put Hacker on your CV and expect to get a job. However it was more than a hobby. Most of his hardware had been paid for by various illicit deals, brown envelopes full of cash in return for a floppy disk.

His day job was the only day job a decent hacker would consider, games programming.

At 07.00 his alarm went off. At 07.01 the alarm hit the wall the other side of the bedroom. Marks on the wall indicated this was a common occurrence. A few seconds later he swung his legs out of bed and headed for the bathroom. Once the bladder enforced NMI had been dealt with, he went to deal with the second pending interrupt. Coffee.

Coffee was the single most important substance known to man, well as far as SnakeByte was concerned. Without coffee his world would not function. Strong and sweet of course, caffeine and sugar all a brain and body needs.

He sat down in front of the TV and caught up with what passed for news in this country as he consumed his first coffee of the way and his first nicotine hit. Anne Diamond was looking very nice this morning, but nothing of any major import to SnakeByte was happening.

Once breakfast was consumed he jogged upstairs, hit the bathroom, dressed and grabbed his case before leaving for work. His case was heavily padded and held his precious 20M hard drive with all his game code on it. SnakeByte was far too paranoid to leave it in the office. Far too many people had access to the building. While he trusted his fellow coders with his life, the games testers were a real problem. He had to repair a wall a few weeks ago after he put a games tester through it for the crime of putting a virus on his development machine.

A short walk up the hill to the waiting bus and he settled in for the four mile journey to work. SnakeByte lived on the edge of the city. His flat was surrounded by woods and a couple of rivers. Good for escape and evasion.  Good for fishing at the weekend as well. The journey into the office was a time for him to think and relax.

Today he was working on the communication systems for his game. The system was based on pattern matching. The player could type in a sentence and his code analysed it and selected a response using words from the input string. Special flags in the database could trigger events in the game so by asking the right things the player could gain an ally, or buy interesting items.

The bus stopped and as usual the driver had to deal with a twirly. A twirly is a pensioner trying to use his/her bus pass before 09.00. It comes from the bus driver having to shout at the top of his voice "It's too early love!"

To pass the time SnakeByte created a few strings for his communication system to handle this situation.
twirly:
dc.b "{3:A}(A30)I'm sorry love it's too early to use a bus pass.[A+10](A60)Too early, wait till nine o'clock.[A+15](A100)For the last time you can only use a bloody bus pass until after nine! Are you deaf daft or stupid?."

﻿Three possible responses based on flag A (anger). Repeated attempts will raise the anger setting of the driver and result in a different response.
SnakeByte came back to the real world and realised his stop was approaching. He rose from his seat and made his way into the office. 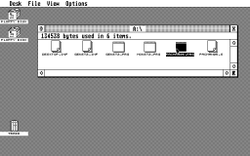 The morning went quickly, he created and tested lot's of communication strings, got the link into the trading system working and even had time to create a few trade items.

He was suprised when his friend Jacko tapped him on the shoulder and said "Lunch time".

Lunch time always involved a trip to the pub. Two pints of lager and the times crossword. A chance to de-tune for a while and refuel. Beer is the fuel of choice for SnakeByte. Food releases endorphins making the brain want to sleep, not a good thing for a real coder. A hungry coder is a good coder. Beer unleashes the imagination allowing for creative code.

The location for lunch is always the same as well. Once you find a good pub, you support it. Otherwise the suits move in and put Kylie Minogue on the jukebox. You can't enjoy a beer in that environment. The staff know them well and have their lunch waiting for them as they walk in. Taking their usual location at the bar they stick Pink Floyd on and settle into the crossword.

A few minutes later SnakeByte's alarms go off.  It starts with a tingling at the back of the neck and quickly progresses to increased heart and respiration rates. His body is preparing itself for combat. He quickly scans the room looking for whatever has set his subconscious off. A suit is arguing with one of the barmaids. He appears drunk, but something about the way he moves doesn't quite fit.

SnakeByte enjoys violence, it satisfies the part of him that isn't involved in coding and hacking. To get good at it, he uses Judo and Rugby. Rugby Union of course. Rugby League is the creation of the devil. The bar staff know that they can call on him if they are in trouble, so he moves over to the drunk to lend a hand. All his senses were now fired up, he was aware of everyone in the area and what they were doing. Some were ignoring the incident, others were sitting back to watch the show. He focused his mind on the drunk. He sounded drunk, but his movements weren't right. He was acting drunk.

As SnakeByte got close to him, he confirmed his suspicion. He couldn't smell alcohol on the drunk at all. Fully fired up now SnakeByte closed on the drunk and calmly escorted him to the door.

The banter continued as SnakeByte gently dragged him to the door, as they passed through it, the drunk made his move. It wasn't the one SnakeByte expected. Instead of a punch, head butt, or kick, he felt the drunk slip something into his pocket. Without reacting, he dumped the drunk on the floor outside the pub and watched as he got too his feet. SnakeByte was annoyed so he didn't dump him gently. With a few more insults the incident ended with SnakeByte's final line. "Call me something I've never been called before and I might get upset". The drunk continued to stagger off until he reached the corner of the street when he suddenly sobered up and walked away.

Confused and annoyed, SnakeByte returned to his pint, accepting the friendly insults from the rest of the regulars on the way.  He carefully slipped his hand into his pocket, it was a disk. Why the hell would someone create all that drama just to give him a disk?

After lunch he returned to the office. The afternoon dragged. The disk in his pocket taking up far too much of his mental bandwidth for proper coding, he filled the afternoon with busy work. Backing up his hard drive, placing the backup in the safe, scanning his machine for viruses, etc.

After work he didn't even bother with his normal pint, he nearly ran out of his office and grabbed a taxi home.