Xyltharn floated across to his work dome. Today would be a good day. His research into silicon based life forms was complete and as expected they had barely survived the first four billion iterations. Silicon just wasn't a good base for lifeforms, even though YnTatooyre had published a set of parameters that she claimed created a universe ideal for silicon, Xyltharn had proved her wrong. A shimmer of pleasure pulsed through his polyps at the thought of her reaction. Turning blue in front of the whole university, then when the students started laughing she vented ink and squirted off stage. That was a good day. 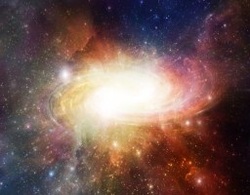 Pushing thoughts of his victory behind him, Xyltharn triggered the start up sequence and linked into his dome. Images flicked through his mind as the programming interface came online. He opened up the configuration matrix and started entering values for universal constants. Previous experiments meant he now had values for most of them memorised. Some he left at their standard values, Pi for example. He had played with altering that once or twice, it didn't go well. One or two he knew had to be exact for carbon based lifeforms to exist, those he took great care with. He then tweaked a few of the basic laws of physics just to make the likelihood of water bearing planets optimum. Finally he executed his code.
The programming interface disappeared from his mind, replaced with the deepest black he had ever expierienced. This was the part he loved. In his mind the big bang began. Instants later simulated time began and the universe began to expand. He had watched the start of a universe many times now. The first few times he had just floated there watching the first stars igniting, planets forming, galaxies colliding, creation in all it's glory displayed directly in his mind. Now it was getting a little old. He thought time forward a few billion iterations and started a universe search for water planets. Very quickly the search started to show results, so he slowed time and moved his view point to examine some of them. Several were in good locations in their solar systems, each one was seeded with an asteroid impact, then he thought time forward again.
A few hundred million iterations later he slowed time again and revisited all his seeded planets, the first had failed completely. Life had failed to appear. His polyps flashed red in annoyance, then he moved onto the next. 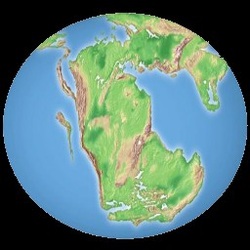 Looking good, the planet was in a perfect solar location, the plate tectonics simulation was working perfectly, life had formed.

With a green shimmer of pleasure he descended to the planet and looked at the life forms.

Damn, lizards. Xyltharn hated lizards. He decided all was not lost, a few local search terms thought into the interface and he found what he was hoping for. Early mammalian lifeforms. Perfect.

He thought himself out from the planet and searched for an asteroid just the right size. Several fit the bill. With a thought he selected one and sent it to impact the planet. 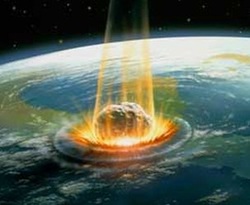 He watched the impact from a viewpoint high above the planet, spectacular. The fireball raced across the planets surface at an impossible speed, the shock wave was even faster and the hated lizards died in their millions.

A thought increased time slightly and he watched as the dust clouds cleared and life began to flourish again. He checked the mammals had survived, and with another shimmer of green he increased time and floated back to watch progress.

As he expected, soon thousands of lifeforms had evolved including a strange bipedal life form. Intrigued he slowed time and went to inspect them. Quite repulsive to look at, but with a large brain. He decided to watch this life form and see what happens, they had potential.