SnakeByte sat there waiting. Now the hard part was over, he had made his pitch and been taken seriously, he was strangely calm. As the adrenaline leached from his system. he even became tired. Soon to his amazement he was feeling drowsy and even nodded off for a few minutes.

He was woken by the return of the older man. A quick glance at his watch told him two hours had passed.

"Well Mr Dooley, let's get the formalities out of the way."

With that he dropped a pile of documents of the table.  He leafed through the first one and found a signature box.

"I would normally advise you to read through the document before you sign, but you really don't have a choice. So be a good boy and sign here."

SnakeByte leaned forward, the Official Secrets Act. Signing his life away to the government was not something SnakeByte would normally consider, but as had already been stated. He had no choice.

With a sigh, he signed. The next five minutes were consumed with the same process. Sign here. Initial there. He didn't even know what half the documents were.  When the last document was signed, a new man walked in. He was very different. Denims and a t-shirt. The t-shirt had written on the front of it "I'm in bomb disposal, if you see me running, try to keep up". He didn't look like a bomb disposal expert, so SnakeByte assumed he was the in house hacker.

"Now please explain exactly how you managed to retrieve the data. This is really not my field so I will just pop out and get a cup of tea. Would you like one?"

With that he left, clutching the pile of documents SnakeByte had just signed. He had never considered coffee to be traitorous before, but that was the impression he was left with. The company hacker sat down and put his feet up on the table.

SnakeByte went through everything in detail. They then spent another ten minutes discussing counter measures before the techie hopped to his feet, shook his hand and left. A few minutes later the older man returned. This time he was with a very serious looking younger man in a white shirt and tie. No coffee. This was cruel and unusual.

"Right Mr Dooley, what is the hand over procedure?"


"I phone him and say 'fancy a pint', he gives me a time. We always meet in the Frog and Parrot pub, Division street Sheffield"


"No. He does arrive an hour early and do a really bad attempt at counter surveillance. I see him wandering around in a long coat, stopping by windows and looking in the reflection, suddenly changing direction. Then he goes back to his car and gets changed before coming to the pub. He's a dick."


"I've always assumed he was American"


"He has a slight accent, he once called the lift an elevator, and he drinks whiskey on the rocks."


SnakeByte got the impression that Miller would be killed just for putting ice in good whiskey.

At this point a phone was delivered to the room and plugged into a socket on the wall. The socket looked really strange. Not like a normal phone socket at all. Scramblers maybe, or some form of hardware tracing?

SnakeByte picked up the phone and dialled from memory. Three rings later Miller picked up the phone. The meeting was set for 20.30 that evening. After the call, the other two had a whispered conversation. The older man stood up and just said...

That was it. A tinge of fear crept back into SnakeByte's system, but before he could think about it the other man began talking.

"Right Mr Dooley from now on you can call me George. I am your handler. In a moment we will be leaving in a van for Sheffield. During the journey we will brief you on what you can and can't do. You will follow my instructions to the letter. We will fit you with a recording device and you will hand over these disks to the target. You will not alert him to our presence in any way. Once the handover is complete, what normally happens?"

This guy was all business. After the aloof treatment he had received thus far, it was quite refreshing. SnakeByte was not fooled though. George may be the most dangerous man he had ever met.


"I usually stay and have a few more pints, he leaves as soon as he has finished his whiskey on the rocks."


"Then that is exactly what you will do. When we are sure Miller has left the area I will walk past you and go to the toilets. You will follow me so I can recover the recording device. Then we will be done."

SnakeByte seriously doubted that.  Before he could ask any questions the door opened and he was guided out the front door into a white van. Seconds later they were speeding through London. 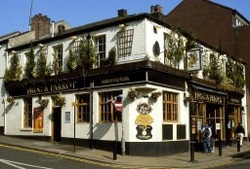 The journey up the M1 passed really quickly. SnakeByte was bombarded with questions, given orders about what he could and couldn't do. Then they went through everything again, all the questions were in a different order, all the instructions in exactly the same order.

Towards the end a recording device was taped to SnakeByte's chest. It was smaller than he expected, but they used a lot of tape. He was going to get a free chest wax out of this.

They arrived in Sheffield and he walked into the pub at seven, an hour and a half before the meeting. SnakeByte took up his usual spot, just by the parrots cage. Well actually it was a Macaw, and the frogs in the tank next to it were really toads, but Macaw and Toad doesn't work as well as Frog and Parrot.

Paul the assistant manager was behind the bar. He spotted SnakeByte and instantly pulled a pint of Reckless. Reckless was the standard beer, brewed on the premises to be about 4.5%. Paul was wearing the new t-shirt they had just printed. On the front it said 'I'm a Reckless Lover', which SnakeByte thought was a bit iffy. The back was more amusing 'If found in gutter, please return to The Frog And Parrot, Division Street, Sheffield'.

He spent the next hour chatting with the bar staff and drinking as slowly as he could without raising attention to himself. He had one scary moment when a couple had an argument that looked like it would get violent. Should he get involved as normal and risk the recording device, or risk raising attention to himself by doing nothing? Luckily it calmed down and he could just stand at the bar and drink.

Right on time SnakeByte spotted Miller approaching the pub. He ordered another pint and a scotch on the rocks for Miller, and watched him approach.


"Evening Dude, you have something for me?"


"I wouldn't have called if I hadn't. Have you something for me?"

Miller tapped his pocket, and smiled. He took a sip of his drink and pulled out a fat brown envelope. SnakeByte reached into his pocket and removed the disks. Without further ceremony, they completed the hand over. SnakeByte had to continue as he would normally have done, or Miller would have smelled a rat, so he turned on him.

"What the fuck was that stupid hand over? You just created a memorable event for everyone in that pub when all you had to do was pass me a scrap of paper. Next time grow a fucking brain and do it right."


"That wasn't being careful, that was being stupid."


"We will have to agree to disagree. Any problems?"


"No need, the checksums matched. It was a good download"


With that he downed his scotch and slapped SnakeByte on the back before leaving with a spring in his step. SnakeByte downed the pint in front of him and ordered another. George walked past before the pint arrived, so SnakeByte left the money on the bar and followed him.


As he stepped through the door, George put his foot against the bottom of it to prevent anyone else coming in. SnakeByte lifted his t-shirt for George to grab the recording device. Which he did by ripping it and most of SnakeByte's chest hair off in a single move. He then simply walked out of the door.


SnakeByte went for a piss, then walked back to the bar. Expecting a bullet to slam into his head at any moment.
Nothing happened. He got to the bar alive, his pint was waiting for him.


Could it be over?